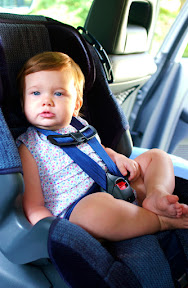 Children should remain in a rear-facing car seat until the age of 2, according to new recommendations released today by the American Academy of Pediatrics (AAP) and the National Highway Traffic Safety Administration.

It is not uncommon for parents to move their child's car seat to face forward at age 1, but now the AAP is saying that's too soon. The lead author of the AAP policy statement said the recommendation should serve as a guideline to help parents.

The recommendation is based on a 2007 University of Virginia study in the journal Injury Prevention that found that children younger than age 2 are 75 percent less likely to suffer severe or fatal injuries in a crash if they are facing the rear.

"To date, no injury has been reported by this mechanism, but even then, the risk of serious injury to the head, neck and spine which occur in infants forward-facing far outweigh the potential risk of injury to the lower extremities up to their second birthday," said Helms.

Additionally, the AAP's revised recommendations call for older children to ride in a booster seat until 4 feet 9 inches tall, or 8 to 12 years of age. Booster seats allow for proper fit and positioning of the seat belt.