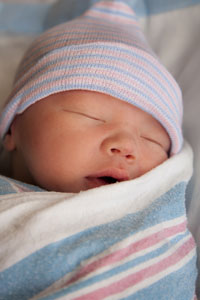 Recent studies have shown that infants may benefit from a delayed clamping of the umbilical cord at birth. The researchers suggest that extra time attached to the cord may help with brain development. We talked to Ana Tobiasz, MD, an obstetrician and maternal fetal medicine fellow with Le Bonheur’s Fetal Center, to learn more.

What is delayed cord clamping?

Delayed cord clamping is the practice of waiting a period of time after birth before clamping the umbilical cord. For centuries, this was the standard practice. However, over the last 50 years the practice of immediate cord clamping has been commonplace for several reasons, none of which have been substantiated in the scientific literature, including reducing maternal blood loss at the time of delivery and decreasing the risk of neonatal blood loss into the placenta.

There is mounting evidence that there are several short-term benefits to waiting at least a minute to clamp the umbilical cord. Suggested benefits include:

What long-term effects have the studies found?

Should I delay my newborn’s cord clamping?