Heart health for a lifetime

Did you know that heart defects are the most common of all birth defects?

The numbers are pretty staggering. About one in every 100 newborns has a heart defect, and in the United States, that amounts to nearly 40,000 infants born with complex heart problems annually.

Treatment of these defects has come a long way, and thanks to major improvements in care, many children are given the promise of full lives ahead. That doesn’t mean, however, that regular care ends with childhood for many congenital heart disease patients.

Even if a heart defect is surgically repaired in childhood, as people with heart defects grow older, further heart problems may occur. Some congenital heart disease patients require lifelong care. 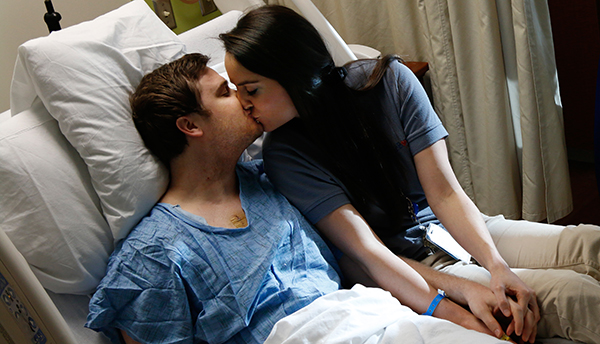 Although Le Bonheur is a children’s hospital, that doesn’t mean our expert team of cardiologists, cardiac surgeons and nurses trained to manage congenital heart disease only treat children.

Just ask Benjamin Hornbeck, who had recent heart surgery at Le Bonheur at age 28. Ben was born with a common congenital heart defect called a ventricular septal defect (VSD), which caused a hole in the wall separating the two lower chambers of the heart.

Ben had not attended regular checkups with a cardiologist as an adult, but was urged by his fiancé, Abbey, to get checked out. Ben learned he needed open heart surgery, and he was referred to Le Bonheur’s Dr. Christopher Knott-Craig for the procedure.

When Abbey and Ben received the date of Ben’s surgery, they decided to get married on the fly.

“We didn’t want this hanging over our heads before the surgery,” Ben said. “So we said, ‘let’s just do this.’”

The couple had only about a week to plan, but their families were extremely supportive and helped throw a wedding on the back porch of their home a day before Ben was admitted to Le Bonheur.

Abbey and Ben spent the first few days after their wedding on the 10th floor of the hospital, but they soon returned home as husband and wife.

The ACHD program at Le Bonheur Children’s Hospital and Methodist University Hospital includes a team of cardiologists, cardiac surgeons and nurses trained specifically to manage congenital heart disease in adults. Care includes a depth of programs and services, expert treatment of adult congenital heart defects and a pediatric and adult team approach. Le Bonheur’s ACHD program is led by Medical Director Rush Waller, MD, who is one of the first cardiologists to pass the first-ever ACHD board exam.

Want to learn more about Cardiology at Le Bonheur?