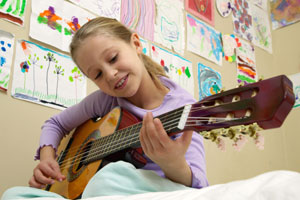 There are lots of adults that remember learning to play an instrument as a child, some with fondness and others with dread. Now it seems that there will be some unexpected benefits from all of those hours of study. Thomas Hobson, director of Child Life at Le Bonheur, shares ways to incorporate music into your child’s life.

A recent study found that musical training in childhood helped the brain functioning of older adults. More specifically, the brains of older adults who had music lessons, as a child, responded faster to speech than their counterparts that did not receive the lessons. In addition, the more musical training a person received, the faster their brains responded. This is even more amazing when you realize that most of the group had not picked up an instrument in decades.

This study goes to reinforce additional research that has shown impact of music on the brain’s development. Research has demonstrated that music can stabilize behavior state, oxygen saturation, respiration rate and a number of other physiological responses. It’s been learned from MRI studies that there are more areas of the brain engaged for music than the speech areas. This has led to the development of techniques that engage the musical areas of the brain when developing or relearning functional language skills.

So, what can a parent do to help their child? The good news is that many people have introduced their children to music, whether it’s a lullaby for an infant or singing an old favorite song. Here are some additional pointers: