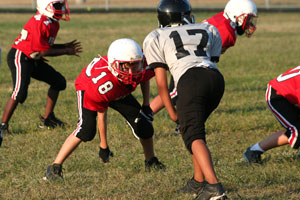 A new law in Tennessee is designed to reduce youth sports concussions. Le Bonheur experts were part of a state-wide team involved in crafting the legislation that requires schools to adopt guidelines to educate coaches, athletes and families about the symptoms and dangers of concussions.

Paul Klimo, MD, chief of Pediatric Neurosurgery at Le Bonheur, was involved in legislation planning and highlight what parents should know about concussions.

First of all, what is a concussion? A concussion happens when a blow to the head or body causes the brain to shake. This causes an interference with how the brain works temporarily.

“What parents need to understand is that a concussion can be mild to severe but all should be taken seriously and evaluated properly”, Klimo states.

Contrary what many people believe, most concussions do not lead cause a loss of consciousness. Symptoms may develop over a few days, but most children are fully recovered after 7 to 10 days.

Signs to watch for after your child has been hit in the head (or after his/her head and upper body have been violently shaken) include:

“If any of these occur, your child should be evaluated in a timely fashion by a medical provider," Klimo said.

Make sure your child’s coaches and trainers are trained to recognize when a child has concussed and make sure he or she is appropriately evaluated.

Most importantly, when a head injury occurs, the child should never go back into the game. A second hit could cause serious neurologic harm and even death.

“The decision to return to play requires careful deliberation. The child or athlete must be symptom and medication free before they return to play. In fact, the focus should be first a ‘return to learn’ rather than a ‘return to play’. Once cleared to play, the return should be gradual,” Klimo said. “If a child has suffered multiple concussions already, I would strongly recommend to the child and parents that another sport by pursued. You don’t hear many concussions occurring in golf or tennis!”

Want to learn more about Neurology at Le Bonheur?