“Not compatible with life.”

Those words rang loud in Saralyn and Mark Crowell’s ears just hours after their first child, Jack, was born on Thanksgiving Day 2012. Saralyn had a normal pregnancy and delivery, but after the third time that Jack struggled to eat, Saralyn and Mark, started to worry.

Then came the “looks” from Neonatal Intensive Care Unit nurses – the looks a mother never wants to get, the looks that assure you something is wrong.

Jack’s diagnosis: Hypoplastic left heart Syndrome (HLHS), a congenital heart defect in which the left ventricle of the heart is underdeveloped, affecting normal blood flow. The defect is usually fatal unless treated within a few days or weeks after birth, and Jack was quickly transferred to Le Bonheur Children’s Hospital. There, Cardiovascular Surgeon Christopher Knott-Craig, MD, prepared for a Norwood surgical procedure, the first of three planned surgeries Jack would need to “rewire” his heart. 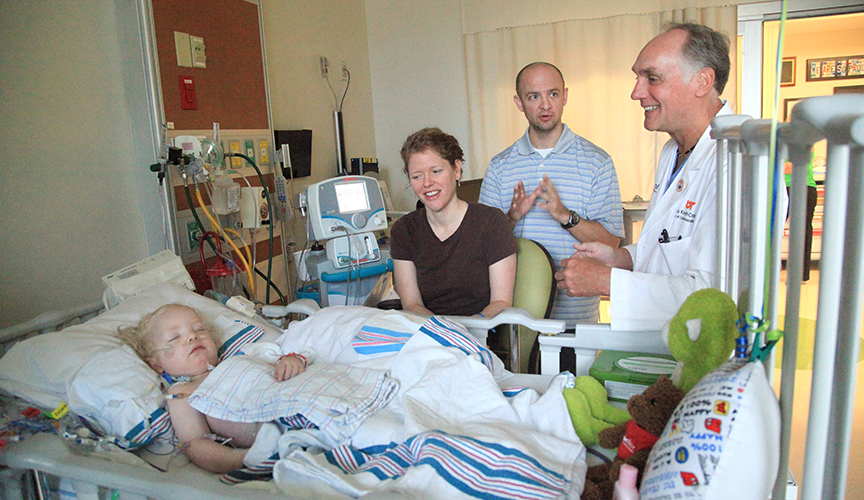 In a field of medicine where outcomes matter most, the Crowells quickly started studying up on HLHS and the  Norwood operation.

They rested easy knowing that Knott- Craig, a pioneer for some of the most complex congenital heart defect procedures, touted a 90 percent survival rate for the Norwood operation – far better than the Society for Thoracic Surgeons national average. Knott-Craig was surrounded by an experienced cardiology team who assured them that Jack had better than a fighting chance.

STS recently gave Le Bonheur’s Heart Institute the highest possible three-star rating. Le Bonheur is one of only 10 of the STS’s 117 participating programs to receive the rating in the most recent STS Congenital Heart Surgery Database Feedback Report.

“That’s what saved Jack’s life,” said Mark Crowell. “All those people were in place the day we walked in the door. We were thankful for the foresight Le Bonheur had to put a team in place that could provide that level of care for our son.” The Crowells benefited from a growing Le Bonheur Children’s Heart Institute team focused on transforming the way it cares for children and adults with congenital heart defects by providing a depth of talent, technology and research.

In the next five years, the Heart Institute will expand the foundation it has built by developing five to 10 new destination programs, recruiting another 25 faculty members, adding advanced specialty fellows and developing new areas of research.

The result: improved care that focuses on the changing needs of children and adults with congenital and acquired heart conditions.

The recruitment of Heart Institute Executive Co-director Jeffrey A. Towbin, MD, in 2015 signaled the next step in the history of the Heart Institute at Le Bonheur Children’s. Hospital leadership spent the past several years laying that foundation of which the Crowells speak – recruiting specialized cardiologists in fields like electrophysiology and adult congenital heart defects, adding advanced technology and operating room and delivering some of the best surgical outcomes in the country under the leadership of Knott-Craig. Towbin is working now to build on that foundation, focusing first on developing destination programs and recruiting sought-after experts to build them. He’s starting with an area he knows well: cardiomyopathy and heart failure in children – a field in which he has spent more than 25 years of his career.

Towbin and the heart team also will focus on expanding super-specialized programs like:

“We have the surgical and medical teams in place to look beyond patient survival – now, it’s about lifestyle and giving children and adults with congenital heart defects and heart muscle diseases a great quality of life,” said Towbin. 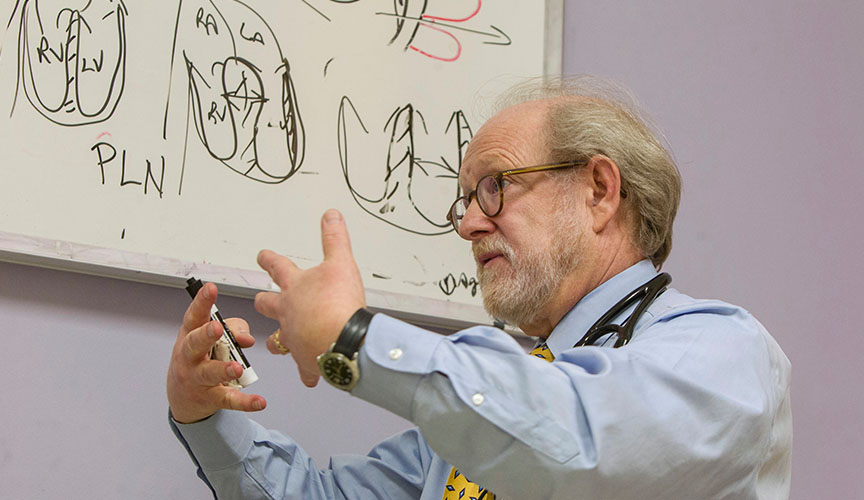 To build those programs, the Heart Institute expects to recruit 25 cardiologists in the next five years – five of those within the next few months.

Interventional Cardiologist Thomas Fagan, MD, moved his family to Memphis from Children’s Hospital Colorado in Denver just three months after Towbin started calling. Towbin served as one of Fagan’s mentors at Texas Children’s Hospital and quickly sold him on his vision for the Heart Institute. Fagan, who became the medical director of the Catheterization Lab at Le Bonheur in August, says he was attracted to the “whole push to take things to the next level.”

“I know Jeff can build a program, and it became enticing – the thought of coming to help build and move treatments and the science forward,” Fagan said.

Fagan is taking the reins from former Catheterization Lab medical director Rush Waller, MD. Waller, the new medical director of the institute’s Adult Congenital Program, is working to build a robust program that supports the ongoing and complex needs of adults living with congenital heart disease. He will lead the program with Cardiologist Ryan Jones and Umar Boston, the hospital’s new surgical director of Heart Transplant and Mechanical Circulatory Support.

Towbin pioneered the concept of pathway-focused candidate gene analysis using his “final common pathway hypothesis,” and calls his work in understanding how heart muscle turns into cardiomyopathy his most important research to date.

“Many years ago, my lab was able to identify a major gene for muscular dystrophy, the dystrophin gene, as a cause of just heart disease instead of heart and muscle disease,” Towbin said. “We’ve used that to enable us to understand what other genes and proteins might be causative of cardiomyopathies, heart failure and sudden death.”

Towbin plans to grow the research program to focus more on personalized medicine for congenital heart disease and cardiomyopathies.

Boston comes to Le Bonheur from Washington University in St. Louis and St. Louis Children’s Hospital, where he served as a pediatric cardiothoracic surgeon. His expertise is in heart transplantation, mechanical circulatory support, adult congenital heart disease and neonatal/childhood cardiac surgery. “Drs. Fagan and Boston will help build services that we know children in our region and beyond need,” Towbin said. “They are the first of several new physicians and physician scientists that we plan to bring to Memphis in the next few months.”

That willingness to look forward and find new approaches to care is what attracted Heart Institute Co-director and Cardiovascular Surgeon Christopher Knott- Craig, MD, to Le Bonheur in 2008. Knott-Craig, a pioneer in congenital heart repair in neonates, brought a holistic approach to post-surgical care that paid great attention to mitigating pain.

Expert surgical technique was coupled with great attention to the patient’s five senses – lights were set low, classical music was often played, and parents were encouraged to climb into bed with their children to keep them calm. Patients also are given continuous infusions of low-dose pain medications — all tactics that helped patients stay comfortable after surgery, and in turn, heal faster.

“As technology develops, we want to bring more novel treatments into the cath lab,” Fagan said. “Technology is rapidly allowing us to change how we approach the care we offer there.”

Interventional Cardiologists Shyam Sathanandam, MD, and Rush Waller, MD, have also been working to reduce the amount of radiation patients undergo by using multimodality fusion technology that combines CT and MR images with fluoroscopic images. As a pilot site for Toshiba, Le Bonheur is helping develop the use of fusion imagery to allow realtime navigation in the catheterization lab for patients with congenital heart defects.

Heart Institute leaders expect exponential growth in the next few years, with the foundation of new approaches and the addition of new programs. They are currently developing expansion plans for a campus that include 10 additional CVICU beds, 20-30 more cardiology beds and two additional catheterization suites. As children and adults living with congenital heart defects and cardiomyopathies look for subspecialized care, Le Bonheur will build programs that meet those needs.

That news is music to Memphian Mark Crowell’s ears. He thinks often of the care that Jack will need beyond today – and hopes for advancements in congenital heart defect medicine that can promise his son a long, healthy life. His hope, he says, is that those advancements can be found at Le Bonheur. And they’ll be waiting on Jack when he needs them most. 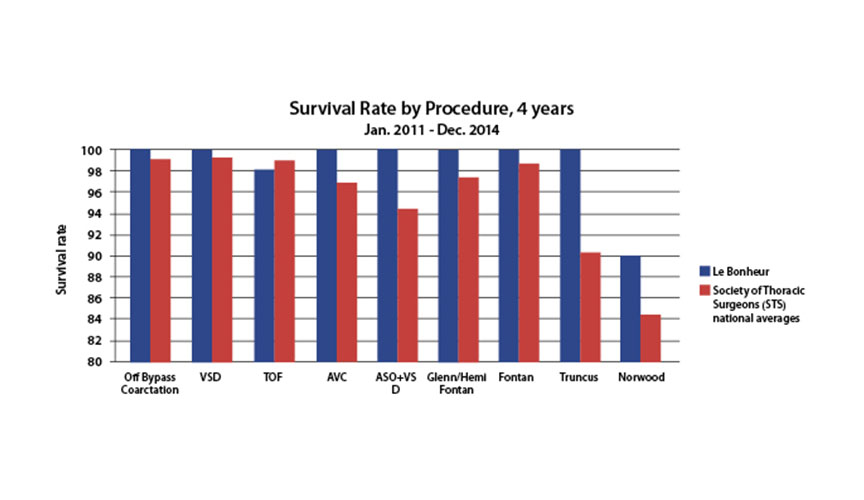