Michael Wiggins had watched Le Bonheur Children’s from afar – he’d seen it grow and earn a reputation as a great children’s hospital. For more than a decade, the hospital built premier programs, recruited top-notch specialists and continued that momentum.

With that foundation laid, Wiggins jumped at the chance to help lead Le Bonheur when then President and CEO Meri Armour announced her retirement late last year. Wiggins was named the hospital’s new president in April.

“I already knew that I was joining a successful team,” Wiggins said. “What I learned when I arrived is that Le Bonheur’s greatest strength is its culture — it’s inspiring to watch this team commit themselves to improving the health of children and their families.” 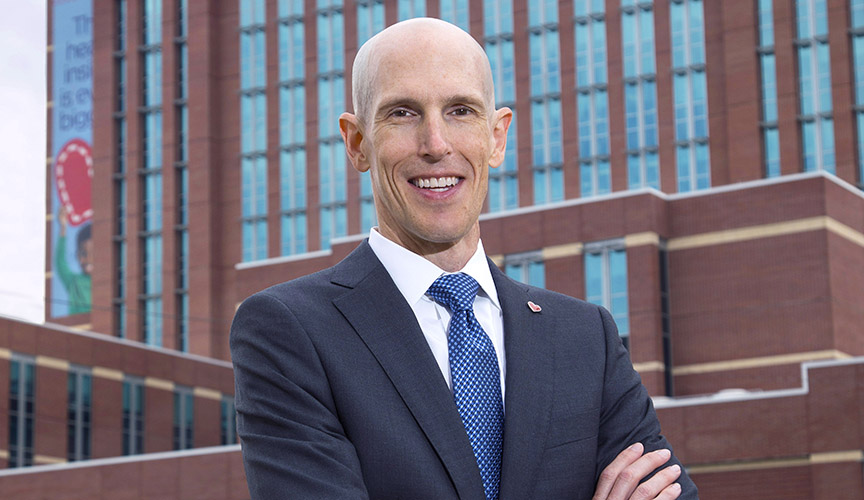 Wiggins comes to Le Bonheur from Children’s Health in Dallas, where he served as senior vice president of Clinical Operations and the Northern Market and administrator for Children’s Medical Center in Plano, Texas. Before that, he served as vice president of operations at Children’s of Alabama in Birmingham. Wiggins says he’s focused on continuing the foundational momentum that’s already been laid and is focused on what he calls the four pillars of an elite children’s hospital: maximizing the health status of all children, without regard to their economic status or demographics; providing the highest quality and safest care; training the next generation of providers and scientists; and investing in research to advance care.

He’s also interested in focusing on creative opportunities to engage children within the community and expand relationships with children and families — whether that be through community partnerships, telemedicine or networking with other hospitals.

I want us to be in relationships with children and families before they know that they need us. We want to be engaged in every aspect of this community — always finding better ways to improve children’s health. The greatest risk we have is being satisfied with our success.

As he settles into Memphis, Wiggins is intent on meeting as many people as he can and learning more about the Memphis region and its complex needs surrounding children. He’s also working to settle his family — his wife, Robin, and three school aged children — into their new city.

“I’ll spend the summer learning how I can help represent Le Bonheur and engage people to invest their time and talents in improving the lives of children,” he said.