Cynthia Fajardo doesn’t remember much about the day her daughter was born.

She recalls arriving at the hospital and going into labor -- a full week past her due date. Then came the shock when delivery room doctors handed Cynthia her little girl, Betzabeth. After that, the details of what should have been one of her most memorable days became a blur.

“When they put her on my stomach, the first time I looked at her I was in shock,” Cynthia said. “I remember everything up until I had her and the incubator process but after that I was sleeping and was pretty much out of it.”

Betzabeth was born with a Tessier cleft palate and cleft lip, which caused a large portion of her upper lip and nose to not fully develop, leaving an inch-wide gap in the middle of her face. The hole was so large that she could see Betzabeth’s tonsils. Prior to giving birth, Cynthia’s ultrasounds didn’t show any facial deformities.

A day later, Betzabeth was transferred to Le Bonheur Children’s Hospital where she would spend the next two months. At Le Bonheur, the Fajardo family got to know the hospital’s craniofacial team - a dedicated group of pediatric neurosurgeons and plastic surgeons who performed life-changing facial surgery on Betzabeth.

In the last 17 years, Le Bonheur has continued to expand its craniofacial program, bringing together a team of multidisciplinary specialists who care for hundreds of children like Betzabeth born with severe congenital facial and skull deformities.

At Le Bonheur, building a comprehensive craniofacial program involved formalizing a team of dedicated plastic surgeons, neurosurgeons, dentists, oral surgeons and other specialists, each who focuses on treating various skull and facial deformities.

Today, the program includes specialists from neurosurgery, plastic surgery, dentistry and oral surgery and attracts patients from across the country.

“We have a multidisciplinary program at Le Bonheur that offers state-of-the-art management for people with craniofacial deformities so that families who have children with these problems can be evaluated and get the care that they need,” Boop said. 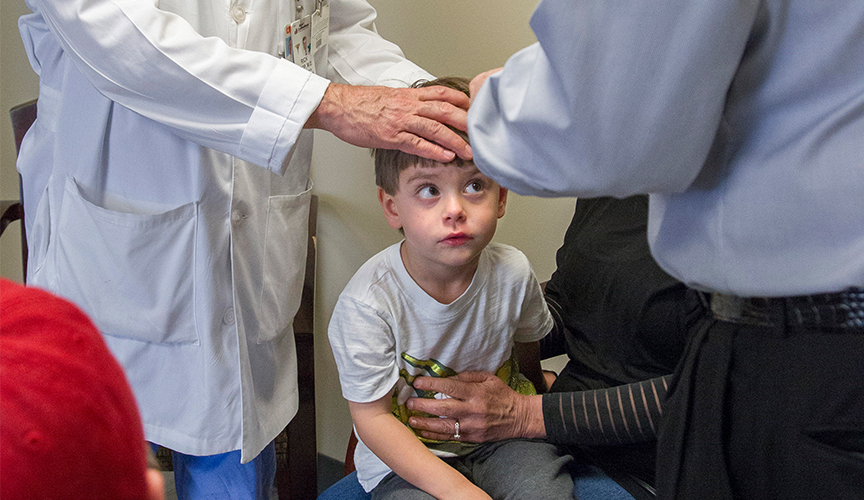 Although there’s no known cause, craniofacial deformities vary from craniosynostosis, microcephaly, congenital ear malformations, cleft palate and lip, hemifacial microsomia and more. Annually, more than 7,000 children are born with a cleft lip or palate, according to figures from the Centers for Disease Control and Prevention, and make up a majority of all craniofacial deformities.

Many of the facial and head deformities can be treated with surgery, including a craniectomy or implanting distracter plates. Surgeries are more than just cosmetic, however. The medical procedures also can help children with breathing disorders, speech impediments or feeding issues. In less serious cases, non-surgical positional molding has proven to be an effective method to reshape the skull.

Most Le Bonheur craniofacial patients have surgery when they are between 6 to 12 months old, Wallace said. Annually, Le Bonheur performs more than 40 craniofacial surgeries.

“For someone born with a facial deformity, they may need a plastic surgeon fix the facial skeleton but they may also need dentistry or oral surgery to make sure their teeth are properly aligned,” Boop said. “Or the patient may need surgery to fix the jaw so they can swallow properly or sometimes they may have problems with sleep apnea because their airway is compromised.”

Because of the complexity of reshaping the skull or correcting a facial deformity, it takes a coordinated effort between Le Bonheur’s neurosurgery, plastics, oral surgery and dentistry teams to provide children with the best possible outcomes.

Every month, Boop and Wallace lead the hospital’s Craniofacial Clinic where patients and their families can meet with Le Bonheur neurosurgeons and plastic surgeons to discuss any medical questions or concerns.

Combining multiple disciplines into one comprehensive clinic is a benefit to all patients, Wallace said, as parents and their children can see multiple specialists in one visit. The dentistry and oral surgery specialties also hold a separate, monthly clinic to help treat children with facial deformities. The two clinics collaborate when deciding a patient’s best surgical option.

“Our Craniofacial Clinic includes plastics and neurosurgery because both disciplines are needed to address these problems,” Wallace said. “It requires both disciplines because these procedures largely encompass reshaping the skull or moving the bony orbits and protecting the structure of the brain.”

During clinic days, the team sees more than 15 patients, and Le Bonheur specialists meet after every patient visit to discuss the child’s medical condition and surgical options. Having various subspecialties in one cohesive clinic not only saves the family time but it also helps ensure all patients and their parents stay informed about treatment options and outcomes, said Le Bonheur oral maxillofacial surgeon Russell Peck, DDS.

“When a patient has to bounce from one appointment to another, the explanation and ideas given by doctors can be disjointed,” Peck said. “The biggest benefit of the clinic is that it gives parents an explanation of their child’s problem. The beauty of the team concept is that it ties it all together and prevents any loose ends.”

Brittany and Jordan Ganus’ son, Braxton, benefitted from Le Bonheur’s multidisciplinary team approach. When Braxton was born, his parents noticed a large bump on the back of his head. The Blytheville, Ark., couple was told not to worry – the stress of labor and the birth canal may have caused his head to grow to an irregular shape but, eventually, it would flatten and grow normally.

At Braxton’s 6-month check up, his pediatrician noticed the back of his skull had grown larger and was elongated and narrow. An X-ray showed that his skull sutures had prematurely fused. Braxton was diagnosed with sagittal suture synostosis.

“His head was long and pointy in the back and was cone-shaped,” Brittany said. “When I began researching sagittal suture synostosis online I was really scared because the first thing I thought was surgery.”

If left untreated, unsafe pressure would begin to form in his skull, and Braxton could have lost his vision or have developmental delays. His head also would continue to grow abnormally. Braxton was referred to the craniofacial program at Le Bonheur where neurosurgeon Paul Klimo, MD, performed craniectomy to remove the fused suture. Klimo made several cuts in the skull to remove the fused suture and widen Braxton’s calvarium, after which Wallace reshaped and secured the bone.

“It’s not just a cosmetic problem,” Wallace said. “If a child’s brain development is not allowed to happen then they are not going to recover from that.”

After surgery, Le Bonheur physicians follow their patients for years, many until they are at least 5 years old. All patients’ surgical procedures and outcomes are entered into a database, and Wallace keeps a photo library of the children, pre- and post-surgery, to compare their appearances as they age.

“It allows us to assess the overall results because we do these operations at a very early age,” Wallace said. “The skull and brain growth is not complete, and the only way to know if what you are doing is correct is by following these children for many years. We have many children who come back to our clinic five or six years post operation.”

Such is the case for Betzabeth, now 7, who will undergo her 12th surgery in late December to move her orbital and nose bones closer together to create a bridge for her nose. Mom Cynthia said Le Bonheur’s craniofacial program has dramatically improved her daughter’s appearance.

“When she was born it was a shock, but as the days went by I thought, ‘This is my little girl and we’re going to get through it.’ Somehow, someway she’s going to grow up, and she may be America’s Next Top Model. You never know,” Cynthia said.