In the battle against antibiotic resistance, Le Bonheur Children’s pharmacists and physicians have joined forces on the front lines.

Threats to public health from antibiotic resistance have been reported in every state, and in 2017, lab tests revealed more than 200 instances of “nightmare bacteria” resistant to nearly every antibiotic, according to the Centers for Disease Control and Prevention (CDC).

“We’re not the antibiotic police,” Lee said of the stewardship program, which was formed in 2011. “Our big concern is making sure that we’re using antibiotics appropriately – that means the right dose, the right duration and the right antibiotic in the right patient.”

Those principles have led to remarkable results: a 96 percent improvement in broad-spectrum antibiotic prescriptions in the hospital’s neonatal intensive care unit; nearly $150,000 saved per year in drug costs; and improved patient clinical outcomes.

The advent of antibiotics came with a warning. In his 1945 Nobel lecture, Sir Alexander Fleming, who discovered penicillin, cautioned against prescription misuse.

“The time may come when penicillin can be bought by anyone in the shops,” he said. “Then there is the danger that the ignorant man may easily underdose himself and, by exposing his microbes to non-lethal quantities of the drug, make them resistant.”

Even before Fleming’s speech, resistance to penicillin had emerged in patients. While antibiotics created easy treatment for once-deadly infections, misuse of these drugs has rendered many ineffective in the face of drug-resistant bacteria.

Clinicians at Le Bonheur Children’s, however, believe that a guided response can reduce or delay the development of antibiotic resistance and, in some cases, restore antibiotic efficacy. 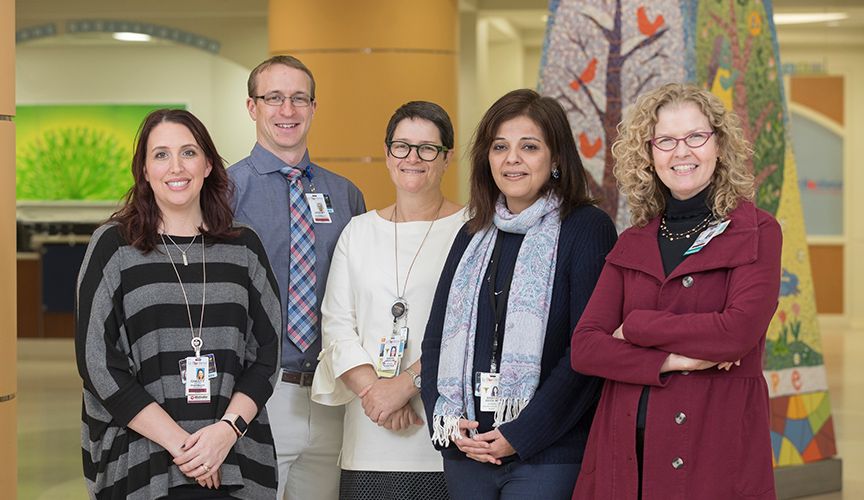 In response to rising antibiotic resistance in bacteria isolated from Le Bonheur patients, the Antimicrobial Stewardship Program was formed under the leadership of Lee and Infectious Disease physicians Sandra Arnold, MD, and Bindiya Bagga, MD.

“Antibiotic resistance is currently one of the greatest threats to public health,” said Bagga. “Modern medical advancements have saved many lives but have also meant that there are very fragile and very ill patients in hospitals and in our communities. They are susceptible to infections from bacteria that would not sicken an otherwise healthy person. We need to preserve the effectiveness of antibiotics for these patients now and in the future.”

According to the Infectious Diseases Society of America, “The primary goal of antimicrobial stewardship is to optimize clinical outcomes while minimizing unintended consequences of antimicrobial use, including toxicity, the selection of pathogenic organisms (such as Clostridium difficile) and the emergence of resistance.”

For the first year and a half, the team worked to create guidelines for the management of common types of infections seen in the hospital’s critical care units such as pneumonia and bloodstream infections.

“During the creation of these guidelines, it was critical to involve the doctors working in the critical care units who would be using them,” said Lee.

After the guidelines were created, they were deployed through meetings, email reminders, individual training sessions and follow up with physicians and critical care unit pharmacy staff. Printed copies of the guidelines are available in each unit and are also posted on the hospital’s intranet for review.

To ensure continued appropriate antibiotic use, the stewardship team reviews individual patient charts daily where broad-spectrum antibiotics have been prescribed and follows up with prescribers with recommendations when a more narrow-spectrum or better suited antibiotic could be used.

To maintain consistency, retrospective audits are conducted for each unit. The stewardship team shares the ongoing work and improvements by meeting periodically with both medical staff and pharmacy groups.

Physicians have also dramatically decreased use of two other frequently used antibiotics, third-generation cephalosporins and vancomycin.

From 2008 to 2017, the stewardship program found that when Meropenem, one of the more frequently prescribed broad-spectrum antibiotics, use decreased, susceptibility for the pathogen, Pseudomonas aeruginosa increased. Reversing antibiotic resistance in other bacteria and for other drugs will likely be more difficulty and take longer than what was seen in this situation. Antibiotic resistance in other bacteria has remained relatively stable at Le Bonheur since the initiation of the stewardship program, which the program members consider a significant achievement. 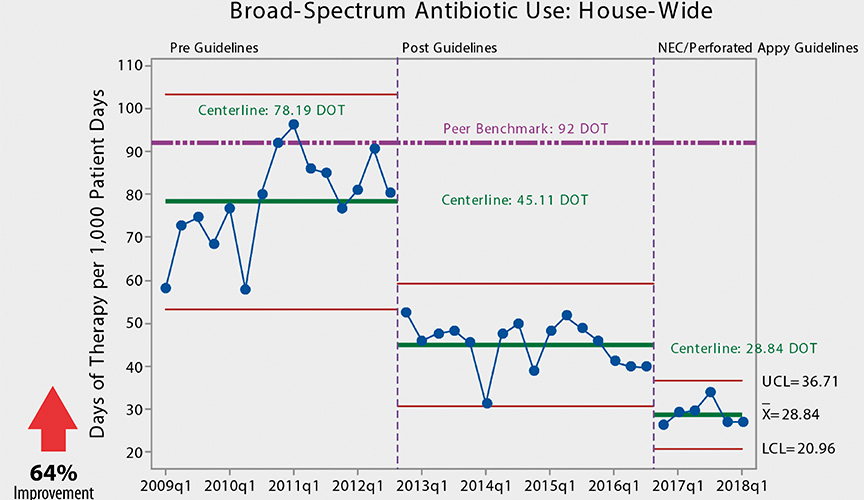 The program is currently focused on improving use of antibiotic therapy for Necrotizing Enterocolitis (NEC), ruptured appendix, urinary tract infections and neck infections. Reassessment of therapy at 48 hours, already vital to the team’s success, will become more formalized with the implementation of a 48-hour “time out,” where physicians stop and review every antibiotic course prescribed in the hospital after 48 hours to determine the need for ongoing antibiotics and whether therapy can be changed to narrower spectrum antibiotics.

And beyond that? A deep dive into diagnostics to better leverage laboratory information to inform prescription treatment. Additionally, the team plans to take stewardship out of the hospital and into the Memphis community to reduce unnecessary antibiotic use for viral infections.

“We are at a point in time where we could enter a postantibiotic era where previously easily treated infections are untreatable,” said Arnold. “Unfortunately this has already happened for some patients in the U.S. It is vitally important for physicians to think about every antibiotic they prescribe, whether it is absolutely indicated and whether it is the most narrow-spectrum antibiotic that could be used their patients. Antibiotic resistance is here. Only by continuing to aggressively attack this problem can we stop the spread of antibiotic resistant bacteria in our community and hospitals.”