A variation in the gene that produces brain-derived neurotropic factor (BDNF) may have an influence on obesity in both children and adults. The study, funded by the National Institutes of Health and led by Joan Han, MD, director of Le Bonheur’s Pediatric Obesity Program, was published in the November issue of Cell Reports.

The study found that the less common version of the BDNF gene may predispose people to obesity due to it producing lower levels of BDNF protein, which helps the brain regulate a person’s appetite. Han’s study also suggests that boosting a person’s BDNF protein levels may help someone with the genetic variation. Researchers also reported African Americans and Hispanics are more affected with the gene variation than non-Hispanic Caucasians.

“For people who have obesity, it’s a struggle,” Han said. “To have an explanation as to why it’s so hard to control their body weight, this finding provides reassurance that it’s not simply a matter of willpower. It gives them hope that doctors are really listening and searching for specific treatments based on the cause of the problem. This is one more piece of the larger puzzle for understanding the causes of obesity and how we can address it.”

Obesity is a problem particularly prevalent in Tennessee, which ranked 14th in the nation in self-reported obesity rates with 31.2 percent, according to a 2014 report by the Centers for Disease Control and Prevention (CDC), the latest figures. Neighboring states -- Alabama, Arkansas, Kentucky and Mississippi -- all reported higher obesity rates. Arkansas ranked No. 1 in the nation at 35.9 percent. Colorado had the lowest self-reported obesity rate at 21.3 percent. 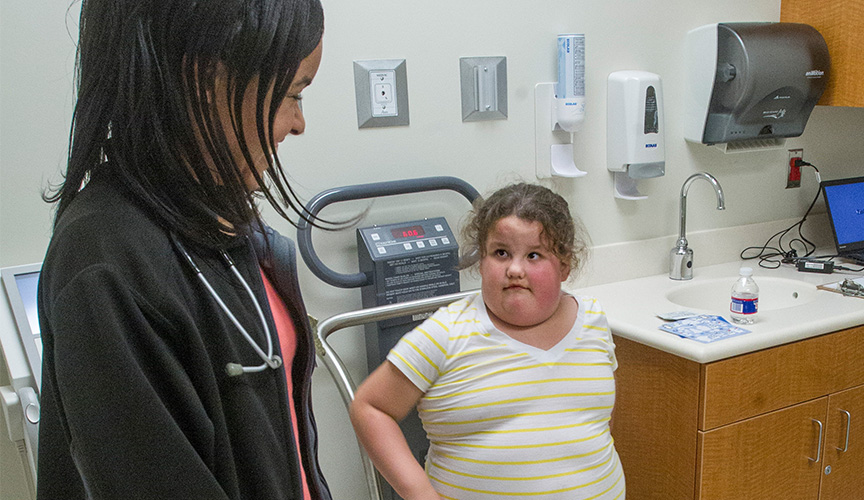 In children between ages 2 and 19 years old, the national obesity rate is approximately 17 percent or 12.7 million children. High school obesity rates in Tennessee also are higher than the national average of 13.7 percent. In 2013, the most recent numbers by the CDC, Tennessee reported an obesity rate among adolescents of 16.9 percent.

As juvenile obesity rates remain high, the wellbeing of children is at risk, Han says. Obesity can lead to lifelong health problems, including high cholesterol, hypertension and diabetes.

Han and her team first analyzed the BDNF gene for naturally occurring genetic changes that alter levels of BDNF productions. After studying brain tissue samples, the team identified an area of the gene where a single change reduced BDNF levels in the hypothalamus, a portion of the brain that helps control body weight and eating. The team then examined the association of this gene variant with obesity in large groups of children adults, completing analysis in January 2015 of information from more than 30,000 people.

After results were compiled, researchers found that the genetic change wasn’t a rare mutation and the variation is common in the general population. Everyone has two copies of each gene, called alleles, and every person inherits a copy from each parent. The study marked common alleles as “T” and the less common allele, which produces less BDNF protein, as “C.”

Researchers then studied the gene combinations, CC, CT and TT, and found people with the C allele -- CT and CT -- had a higher body mass index (BMI) than those with TT alleles. Results from the study concluded the C allele may be linked to obesity.

“We noticed people with the CC version of gene have a lower expression of the appetite-suppressing protein BDNF and have a higher risk of being overweight,” said Han, who has spent her career studying genetic determinants of obesity in the general population and in patients with rare disorders associated with obesity.

Han and her team also discovered the C allele had trouble interacting with a protein called hnRNP D0B, which normally increases gene expression, so this disruption could explain the problem of lower BDNF production. After finding a possible genetic cause for obesity, Han said providing a scientific explanation for being overweight can be “comforting” for some.

Although genetics may play a role in childhood obesity, environmental factors also can contribute to the problem. Han said some environmental causes include children living a more sedentary lifestyle, increased portion sizes and higher sugar intake.

While Han and her research team may have found a scientific cause to being overweight, she and her fellow doctors at the Pediatric Obesity Program are still finding ways to help battle surging national obesity rates.

“We try to have precision medicine by developing individualized diet and exercise programs and finding specific drugs to treat specific genetic causes of obesity,” Han said. “We need to see how each patient responds and learn from it to improve our approach to treating obesity.”