A Voice for Cooper

The story of Cooper Kilburn’s voice is an unlikely one. Because if it wasn’t for a car wreck, his parents would have lost their son before he was born.

Cooper was born with no airway, no larynx and, therefore, no voice. He relied on a tracheostomy in his throat to breathe. He slept on a ventilator to survive the nights. And at 2 years old, he had never made a sound.

Not a cry. Not even a whimper.

That’s how this story begins. Lucky for Cooper, his medical team at Le Bonheur Children’s Hospital made sure that wasn’t the end.

On Feb. 27, 2019, Cooper became the world’s first recorded child born with no airway or larynx to successfully undergo voice box reconstruction. The surgery used Cooper’s ribs to create a voice box and a brand new airway.

Ten weeks later, Cooper made sounds for the first time — laughing with his mom in the comfort of his home.

“I thought I must be dreaming,” said Cooper’s mom, Brooke. “I called his doctor to listen over the phone and confirm — we were finally hearing Cooper make his first noises.”

All it takes is five percent

Brooke Kilburn of Adamsville, Tenn., was 16 weeks pregnant with Cooper when she was in a car accident. Shaken but unhurt, she went to her obstetrician for an ultrasound to make sure all was well with her child. 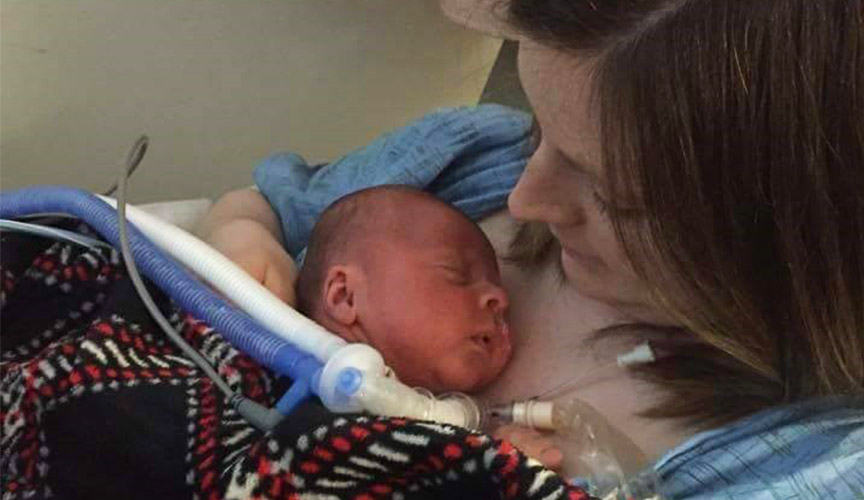 “The obstetrician saw something wrong, but didn’t know what it was,” said Brooke. “A specialist in Jackson, Tenn., told us he had never seen anything like this before. He prepared us for the worst case scenario.”

An ultrasound revealed fluid was building in Cooper’s chest because of a rare condition – total laryngeal agenesis due to congenital high airway obstruction syndrome (CHAOS). Cooper had no airway and no way to breathe outside the womb.

“Fluid had started to back up and compress Cooper’s heart,” said Brooke. “If we hadn’t had that wreck it would have been too late for him.”

As it was, Cooper had a five percent chance of being born alive.

Brooke and Brad Kilburn quickly began searching for ways to save Cooper’s life. Their first stop was another children’s hospital where a surgeon was able to remove enough fluid out of Cooper’s chest in utero to relieve the pressure on his heart. But that was all he was able to do. His recommendation — take Cooper to Memphis and Le Bonheur Children’s Hospital.

“Both our specialist in Jackson and surgeon in St. Louis mentioned Le Bonheur’s expertise for Cooper,” said Brooke. “We knew Le Bonheur was the only place that Cooper could be born.”

We knew Le Bonheur was the only place that Cooper could be born.

The couple met with Le Bonheur Otolaryngologist Jerome Thompson, MD, who along with the Le Bonheur Fetal Center, put together a plan for Cooper to survive delivery. He would be delivered at a neighboring birthing hospital and then transported to Le Bonheur’s Neonatal Intensive Care Unit (NICU).

At birth, Thompson immediately performed an ex utero intrapartum treatment (EXIT) procedure, a partial caesarean section that allowed Cooper to continue to receive oxygen from his mom via the placenta.

“Cooper’s lack of airway required that we leave him attached to his mom via the umbilical cord as long as possible,” said Thompson. “The EXIT procedure allowed us to remove the fluid from his lungs and perform a tracheostomy prior to his full delivery so that he could receive oxygen after birth.”

After delivery, Cooper stayed in the NICU 324 days. Going home was a milestone on a longer journey for the Kilburns. Even at home Cooper remained dependent on a trach at all times and a ventilator at night. If his trach clogged, he would not survive. The Kilburns knew that remaining on a vent was too risky for Cooper. Cooper needed an airway.

Cooper had done remarkably well and followed 2-year-old development milestones, said Thompson. But Cooper’s progress had plateaued after two years and eight surgeries. The time for the surgery was now.

To date, there have only been a handful of documented attempts to create an airway from scratch — all of which have been unsuccessful. If Cooper’s surgery was a success, he would be the first recorded child born with total laryngeal agenesis (a complete lack of airway) to have a reconstructed airway and larynx. During Cooper’s previous procedures, Thompson had also seen embryological vocal cords and knew Cooper still had a chance to make sounds.

The four-hour surgery was conducted in tandem with Le Bonheur Pediatric Surgeon Ying Weatherall, MD. Weatherall removed two of Cooper’s ribs to use to construct the voice box. 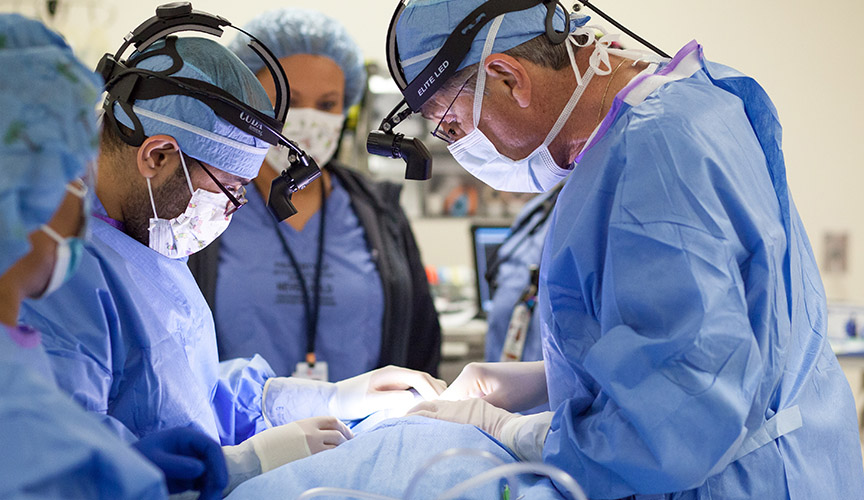 When Thompson made his first incisions, he uncovered more complications. Cartilage and muscles were all in the wrong places or missing entirely.

The surgeons made room for a new airway, created walls for a voice box using rib bone and placed a stent to hold everything in place while mucous membranes grew around the ribs over the next six weeks.

The next step was the hardest — waiting those six long weeks for the stent to be removed to see if Cooper would have an airway.

Six weeks later, Thompson found what he had been hoping for – Cooper’s new anatomical airway remained open after removing the stent.

At a recent follow-up appointment, a small piece of string determined if Cooper’s airway was viable. A small movement of the string as Thompson held it to Cooper’s nose showed that the surgery had been a success. Cooper was breathing through his new airway.

He saved our son’s life and even gave him a voice we didn’t think he would ever have.

Cooper’s journey is ongoing. He undergoes regular procedures to maintain his new airway and still has some follow-up surgeries in his future. But the benefits of the surgery are already evident.

While only the size of a pinky finger, this new airway gives Cooper a better chance at life. Brooke and Brad no longer have to worry about Cooper’s trach plugging. He has a new airway.

And he has even started making sounds for the first time in his life. When crying or laughing, Cooper’s family members are finally able to hear his voice. The hope is that, with therapy, he will continue to learn how to push air over his the newly freed vocal cords and new sounds will come.

“We can’t thank Dr. Thompson and Le Bonheur enough for what they have done for Cooper,” said Brooke. “He saved our son’s life and even gave him a voice we didn’t think he would ever have.”

Give Kids a Voice

Your support gave Cooper’s family hope. Cooper not only survived but he’s thriving. Will you give today to help another child?