Kicker for the high school football team? Why not?

But what Taylor Hughes, of Pontotoc, Miss., was not planning on was brain surgery.

Just like everything else she does, Taylor, now 18, faced that obstacle head on with grace and sheer determination.

It all started her freshman year of high school. Taylor slipped and fell while kicking the soccer ball during warm-ups. The back of her head hit the ground, and she was unconscious for five minutes. She could hear voices of her teammates and coach around her, but she couldn’t respond.

Her mom, Alisha, rushed to the field and found Taylor disoriented. They drove to a local emergency room, where she was diagnosed with a concussion. The routine MRI also revealed a Chiari malformation, a birth defect that causes the base of the skull to be too small or misshaped to cover the brain. 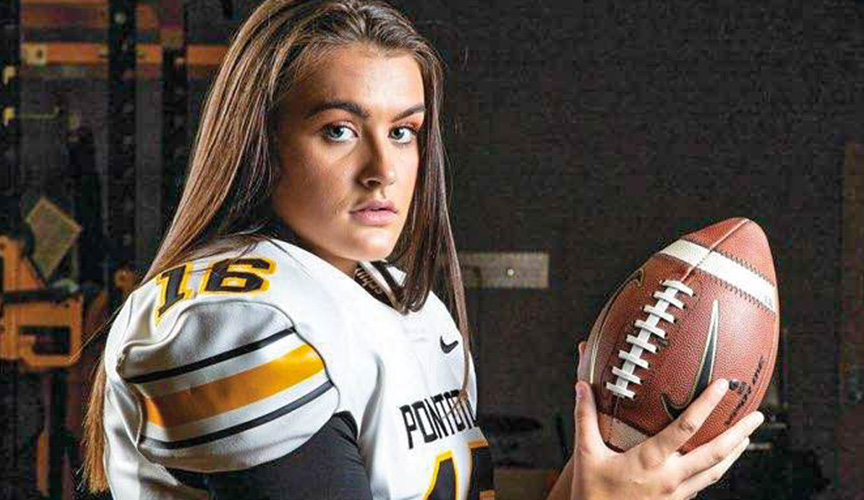 They were referred to Frederick Boop, MD, co-director of Le Bonheur’s Neuroscience Institute, and he believed most of her symptoms were due more to the concussion than the Chiari malformation. Treating Chiari can be a bit of a waiting game, as the compression on the brain can increase slowly.

“After I was diagnosed, I was so upset thinking my sports career was just over. I felt like my entire world was ending. But after talking to Dr. Boop, I was able to calm down a bit,” said Taylor.

Boop says he sees four to five Chiari patients each week in clinic but only operates on one a month.

“Now that so many people are getting scans for headaches, dizziness, fainting spells and concussions, we are seeing lots of radiographic Chiari malformations in patients with no symptoms,” Boop said. “If it is an incidental finding in an asymptomatic patient, we don’t recommend surgery. We only do surgery if appropriate symptoms fit the MRI findings.”

As a precaution, Taylor took a break from sports her freshman year. The following year, she joined the high school soccer and volleyball teams, as well as a travel soccer team.

During her junior year, the varsity football coach asked if she’d share her skills as their kicker. Life was busy for Taylor, but she was grateful to be doing what she loved.

When the summer before her senior year rolled around, Taylor finally let her mom in on a secret. She’d been experiencing Chiari symptoms again – headaches, shaky hands and ringing in her ears, for some time. She was afraid to mention it because she didn’t want to give up on sports. It was time to go back to see Boop.

Taylor had no intentions of quitting any of her teams, and Alisha told her that as long as she stayed open and honest about her symptoms, she could keep playing. Although they knew that life with Chiari sometimes required a “wait-and-see” type treatment, Taylor and her family also understood that one solid hit could cause complications serious enough to paralyze her.

Powering Through the Odds

Despite these risks, Taylor refused to let her teammates down without a doctor’s order. She and Alisha traveled to Le Bonheur with some apprehension about this visit with Boop. Tests showed her condition had worsened. The pressure on her brain had caused a blockage around the spinal cord, but thankfully a syrinx, or fluid-filled cyst, had not yet developed.

Without surgery, Dr. Boop felt certain that a cyst would develop, which could potentially lead to serious complications. In true Taylor fashion, she wanted to do the surgery as quickly as possible, but she had one request.

“Can I play in my last volleyball and football games?” she asked Boop.

That night, her volleyball team was playing four hours away from Memphis, and her final football game of the season was the following night. Boop agreed, as long she felt up to it, and off they went to wrap up Taylor’s high school athletics career.

Two weeks later, Taylor arrived at Le Bonheur for surgery. In many cases, this operation is performed in two parts, the first to remove the bottom portion of the skull and the top part of the vertebrae to see if that alleviates enough pressure from the brain and spine. If not, then a second more complicated procedure must be performed at another time.

Thanks to cutting-edge technology provided by Le Bonheur donors, Taylor’s surgical team had access to an intraoperative MRI. Dr. Boop and his colleagues could immediately see that the first procedure did not remove enough pressure on Taylor’s brain. The team then performed a riskier procedure to remove her cerebellar tonsils, a portion of the cerebellum that dips down into the spinal canal for those with Chiari.

During Taylor’s six-day hospital stay, her family was overcome with appreciation for the team caring for Taylor.

From the Field to the Stage

During her recovery, Taylor asked her mom, what would she do if she couldn’t play sports again?

Alisha told her she’d just have to find something else. Ever the competitor, Taylor soon decided to try her luck at pageants. She entered the Miss Tupelo pageant, and won.

Because of her athletic background and what she’s experienced firsthand as a patient, Taylor is using her voice to empower young people who are experiencing similar health battles.

“Even though we’re so busy these days, this kind of busy comes easy to Taylor. She has no problem talking all day about the importance of Le Bonheur and the Children’s Miracle Network Hospitals,” Alisha said.

Taylor still has her eye on college sports. Not only will she play soccer for Itawamba Community

College this fall, but she’ll also be the first female collegiate football player in the state of Mississippi when she takes the field as the kicker for their football team. 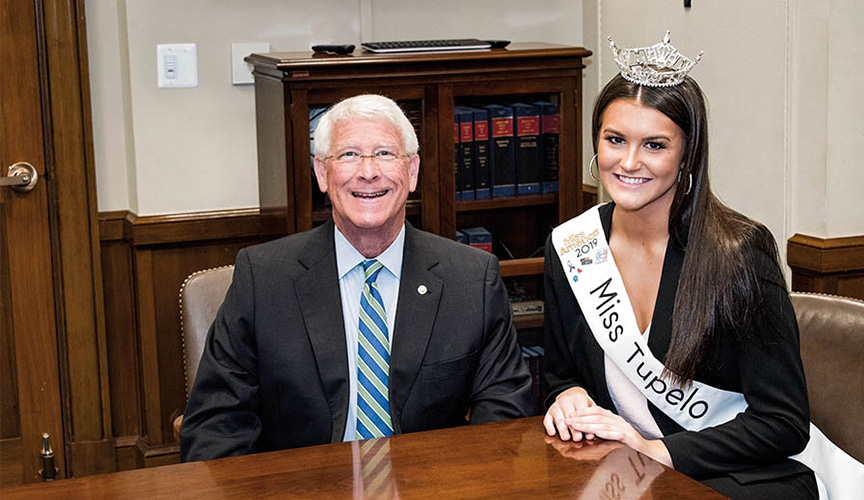 Whether she’s on the field or the stage, Taylor says she plans to share her story to encourage others and support Children’s Miracle Network Hospitals for many years to come.

“I’m so happy I’m a voice for Chiari,” Taylor said. “I want to be out there talking about it, even if I feel like maybe I’m talking too much. I just really want to share my story in case it can help others.”