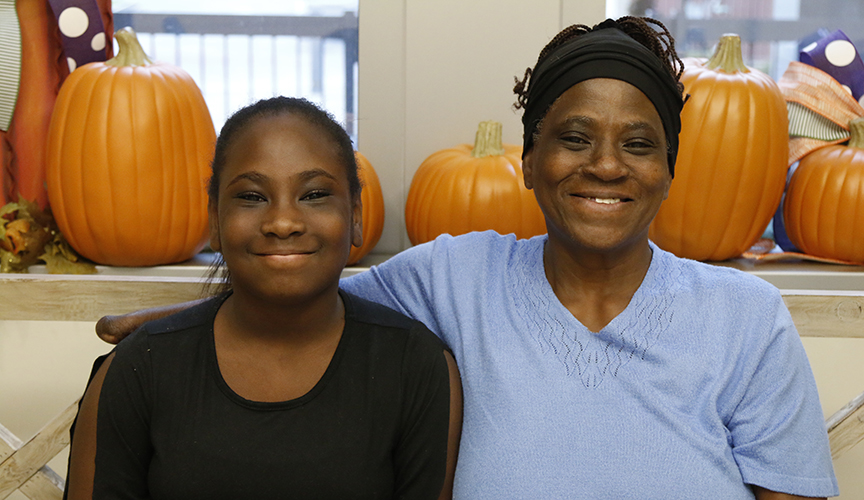 10-year-old Deonna Horton was an average 6th grader until her seizures began suddenly in June 2018.

“She was outside playing ball with her brother Davion,” said Deonna’s grandmother, Maxine Banks. “She stepped off the curb to kick the ball and she fell on the ground and started having a seizure.” Her brother carried her into the house where she started acting like herself again. It wasn’t until Deonna had another seizure a month later that Maxine knew that something serious was happening.

After a trip to Le Bonheur in an ambulance, she was seen by Kelley Ward, NP, who prescribed medications to control her seizures. Deonna’s seizures continued, to the point that after the seizure ended she would be paralyzed on her right side.

An MRI revealed that Deonna had a walnut-sized brain tumor in an area of her brain which generally controls the movement of the right side of the body. Deonna was referred to Amy McGregor, MD, who performed a presurgical evaluation in the Epilepsy Monitoring Unit including transcranial magnetic stimulation (TMS). Because of the location of the tumor, doctors needed to know more about Deonna’s motor function cortex before attempting surgery.

“Specialized preoperative neuroimaging at Le Bonheur was very important in Deonna’s surgical management,” said Deonna’s surgeon, Stephanie Einhaus, MD. “Our goal was to get the entire tumor but not hurt her motor function on the right side of her body. There was no room for error.”

Deonna underwent TMS in order to identify her motor control areas, especially the areas in the left hemisphere around the tumor. TMS determined that her right leg function was controlled by areas just along the anterior and posterior margins of the tumor.

On Aug. 24, Deonna underwent a successful surgery to remove the tumor. Surgery was close to some brain areas that had been identified by TMS as important to Deonna’s right leg function. Because of this, she did experience “foot drop,” or weakness, numbness and difficulty using her right foot and leg that can be experienced temporarily after neurosurgery. After undergoing physical therapy, Deonna now walks with barely any limp.

“We were able to do the operation in the intraoperative MRI suite performing two intraoperative MRIs during the case to check on the completeness of the tumor removal,” said Einhaus. “She awoke with a paralyzed right leg immediately after surgery which resolved within two weeks as hoped.”

After a pathology report, Deonna and her family found out that her tumor was malignant – anaplastic astrocytoma (grade III). She would need to continue treatment at St. Jude Children’s Research Hospital. Le Bonheur is home to one of the nation’s largest pediatric surgical brain tumor programs in partnership with St. Jude.

Throughout it all Deonna has shown toughness and strength with the support of her grandmother Maxine and her mother, Latrice Horton.

“The doctors have admired Deonna because she doesn’t complain even when we told her the seriousness of what was going on,” said Maxine. “You don’t ever know where you’re going to end up in life. We never thought we would go through a journey like this.”

Deonna has been seizure free since her surgery in August. She continues to undergo physical therapy with Le Bonheur and is completing a six-week session of chemotherapy and radiation at St. Jude.