For Maddie Lens, it started with a slight jerk of the head, as she threw her hands above her head.

At first, Maddie’s parents, Chris and Heather Lens, weren’t overly concerned. But as the day went on, the spasms, later identified as seizures, grew in frequency. The first-time parents knew something was wrong.

Within 36 hours of having her first seizure, and after a series of tests administered by doctors at St. Francis Hospital-Tulsa, Maddie was diagnosed with Tuberous Sclerosis Complex, or TSC – a genetic disorder that causes tumors, or tubers, to form on a person’s organs, primarily on the brain, eyes, heart, kidneys, skin and lungs. The tubes on Maddie’s brain were causing seizures, but doctors also found them growing on her kidneys, heart and skin.

The news, Chris and Heather said, was crushing.

“When you have a child, you’re excited about their future – is she going to be a cheerleader, what kind of car is she going to drive. When we got that diagnosis, it almost felt like those things were being ripped away from us,” Heather said. “We had no clue what her future was going to look like.” 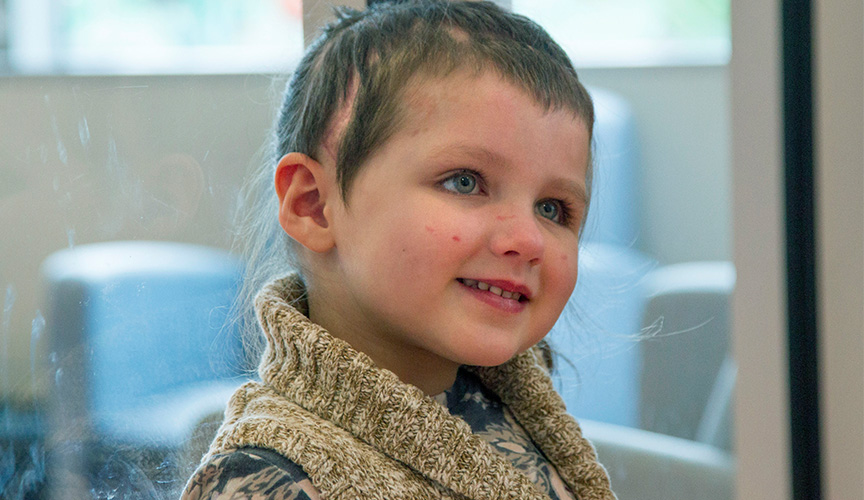 When doctors in Oklahoma decided last fall that surgery was necessary to control Maddie’s seizures, the Lens family was referred to Le Bonheur. Under the care of the hospital’s TSC specialists, Maddie underwent two brain surgeries in November to remove the tubers that were causing her seizures.

In the past decade, Le Bonheur has dedicated resources to expand its TSC research program, recruited targeted specialists, clinicians and researchers and adopted new technology that can be life-altering for patients like Maddie.

Because early diagnosis of Tuberous Sclerosis Complex is vital, Le Bonheur has recruited sought-after TSC experts, including neurologists, dermatologists and developmental pediatricians, each who specialize in treating the various organs the disease affects.

Leading the hospital’s Pediatric Nephrology group, Bissler focuses on helping his patients manage the lesions growing on their kidneys and finding effective treatments that help slow tumor growth. Tuberous sclerosis is a genetic disease that can be inherited from one parent with TSC or can result from a spontaneous genetic mutation. If a parent has TSC, the child has a 50 percent chance of inheriting the condition.

Researchers have found that two distinct genes have been identified to cause TSC, and only one gene needs to be affected for the disease to be present. Both genes, when functioning normally, suppress tumor growth and carefully regulate cell growth through inhibition of the protein called mammalian target of rapamycin (mTOR). Mutations in either gene can cause cells to divide excessively, which can lead to lesions throughout the body.

Tuberous sclerosis is a disease that can affect every single organ in the body, and we really need to deliver care that is coordinatedwith every subspecialty. That is absolutely critical. Having a place that is centrally located makes it easier for patients and their families who can come through Memphis.

Building a comprehensive TSC clinic was the goal for James Wheless, MD, Le Bonheur’s chief neurologist and co-director of Le bonheur’s Neuroscience Institute. An expert in TSC himself, Wheless was instrumental in recruiting Bissler to join him. In the past five years, nearly a dozen faculty members have been recruited to Le Bonheur to focus on specific subspecialties that help manage a patient’s TSC symptoms. By this summer, Wheless said he expects the medical staff to grow to 16, which is a benefit to meet the needs of all the patients who visit Le Bonheur’s TSC clinic each year. The program is now attracting TSC patients from across the country and around the world.

Sarah Weatherspoon, a Le Bonheur neurologist, was recruited in 2013 from Cincinnati Children’s Hospital Medical Center, where she completed her residency and fellowship training. Weatherspoon, who specializes in TSC-related epilepsy, said she was excited to work at a “major center that attracts patients from all over the country.” 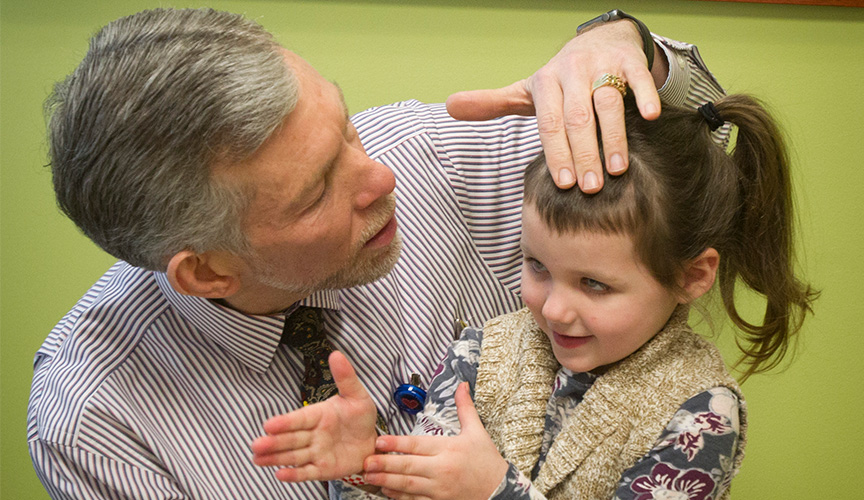 “I wanted to be at an epilepsy center that provided the latest treatments for patients, including clinical trials as well as procedures such as magnetoencephalography, transcranial magnetic stimulation and others as part of an epilepsy surgery evaluation,” Weatherspoon said.

“The program has expanded dramatically not only in scope of what we are able to offer but also in the recent number of kids in the area we are taking care of,” Wheless said.

Searching for a Cure

Although there is no known cure for TSC, specialized treatment can help manage specific signs and symptoms. At Le Bonheur, Bissler recently published a multi-center follow-up study on TS and lymphangioleiomyomatosis (LAM) patients on mammalian target of rapa mycin (mTOR) inhibitors for a renal angiomyolipomata. His findings: the drug is safe for patients and proved to be an effective way to decrease the amount of tumor growth.

Bissler began his tumor therapy work a decade ago with the discovery that mTOR helped reduce the size of renal angiomyolipoma, which is found in approximately 80 percent of TS patients. The original trial was published by Bissler in the New England Journal of Medicine in 2008 and followed patients on sirolimus. A follow-up Lancet study in 2013 showed more than 40 percent of patients on AFINTOR® (everolimus) had a 50 percent reduction in tumor size after a three-month period.

Bissler conducted another trial and examined long-term results, an average of 28.9 months, for 112 patients on everolimus for their angiomyolipomata, and nearly 82 percent of patients saw a reduction of 30 percent or more. Slightly more than 64 percent of patients experienced tumor shrinkage of half or more by week 96. The drug also improved seizure activity and improve neurocognition for TS patients.

Aside from medications, surgery also can be an effective treatment for TS patients. Angiomyolipomata tumors can have their blood supplies interrupted by a procedure called embolization. Bissler has the largest experience with this procedure in TSC patients. Research has shown surgery sometimes helps control seizures caused by brain lesions that don’t respond well to medication. Surgical procedures, such as laser treatment, may improve the appearance of skin lesions. With appropriate care, Bissler said many TS patients are able to enjoy a normal life expectancy, although careful monitoring and follow-ups will be necessary.

While medications have proven to have positive effect on TS patients, other proven methods include surgery to remove lesions, educational therapy to offset developmental delays or psychological therapy to help a person cope and adjust to living with the disease.

In addition to recruiting more TSC specialists and clinicians, Bissler said telehealth, where Le Bonheur doctors can meet with their patients via a computer, smartphone or tablet, will be a key component for the program’s future.

The goal is simple: Reduce and limit travel time for patients and their families and give them the ability to speak with their doctors without having to leave their homes. With Le Bonheur’s new Telehealth program, patients will be able to have digital, face-to-face consultations with their doctors, no matter where they are in the world.

“I want to build a personal relationship that doesn’t create the unbelievable financial burden for the patients to travel, the loss of work or babysitters,” Bissler said. “I’ve had patients tell me the bills they paid to come see me are 10 percent of their costs for the visit. The travel aspect is huge. I’d like to eliminate that. I’d like to eliminate that financial burden burdens of the family too.”

Besides reducing the amount of travel for patients and their families, telemedicine, helps facilitate better communication between physicians, Bissler said. No longer will doctors have to sift through or read through numerous emails, faxed documents or physician notes. Instead, the doctors can easily communicate with each other over the Internet.

In early January, Bissler conducted several consultations using telemedicine technology. During one checkup, Bissler, who was broadcasting from his home office in the Memphis area, was able to speak with his patient in Hong Kong, along with the patient’s doctor who lives in China.

In another case, Bissler was able to visit with a patient who lives in Australia. With Le Bonheur’s adoption of telemedicine technology, doctors will have quick, global communication with their patients.

I will be able to deliver care and communicate the issues with the patient and their physician simultaneously. We can help fill the gap for patients who cannot come to a (TS) center.

“Memphis is unique in that it has an extraordinary combined pediatrics residency program and so I would like to dovetail off of that and develop clinics, physicians in different subspecialties that can care for the TS population,” Bissler said. “If we develop training programs for TS specialists, they can go out and take better care of the community at large, globally.”

And building one of the country’s best TSC clinics at Le Bonheur is what Chris and Heather Lens is hoping for. Both said Maddie’s care at Le Bonheur has helped the 3-year-old to a better quality of life, and after two successful brain surgeries in November, it’s been more than three months since her last seizure. Her communication abilities have doubled, Maddie’s parents said.

“To be able to wake up in the morning and act like nothing is wrong, it’s surreal because it took a few weeks to realize that this is our normal life,” Chris said. “There are times now that I forget, until I see that scar, she had brain surgery, and she’s just a normal little girl now.”