13-year-old Carlin Johnson spent last summer with his grandmother. But it wasn’t the carefree days he expected.

“I was getting progressively more tired,” he said about what he remembers of last summer. “I had stopped being able to walk every day with my grandmother. I was too tired, and I felt like I couldn’t breathe.” 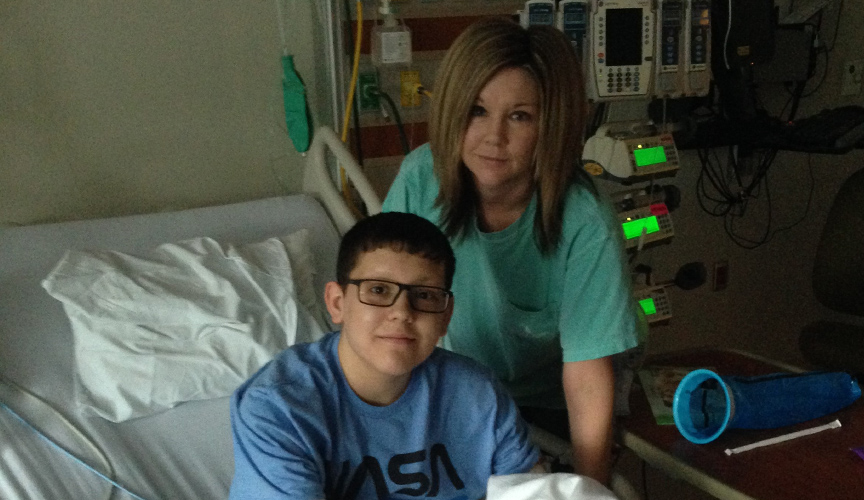 A trip to the walk-in clinic turned into a trip to the hospital in Ripley, Miss., ending in a helicopter flight to Le Bonheur Children’s Hospital in Memphis, Tenn.

Carlin’s heart was failing. In the Emergency Department (ED), he remembers at least nine different doctors coming in and out of the room. He had so much fluid and pressure on his heart he couldn’t lie flat on the exam table.

The verdict? He’d need a heart transplant. “I thought: ‘The doctor has got to be wrong,’” said Carlin’s mom, Carrie.

Fortunately for Carlin, Le Bonheur’s Heart Institute was ready to help him live. And all of the doctors in the ED were just the beginning of the team that would support him and his family throughout his heart transplant journey.

Building Le Bonheur’s Heart Institute and transplant program into one of the best took a significant financial investment that was only possible because of philanthropic gifts. Since 2015, Le Bonheur recruited 19 cardiologists, and staff has received specialized training to meet the needs of complex pediatric heart patients. Important investments were made in life-saving technology, including ventricular assist devices, which serve as mechanical heart pumps while a child waits for a transplant.

And, the Heart Institute relied heavily on donors as the program was getting started. Transplant programs must demonstrate success to be certified by Centers for Medicare and Medicaid Services (CMS) and receive payment from insurance. CMS prefers to consider patient outcomes in their decision to certify a transplant program, so a program has to be prepared to perform a number of transplants at no cost to the patient.

Jeffrey A. Towbin, MD, chief of Cardiology, executive co-director of the Heart Institute, and medical director of cardiomyopathy, heart failure and transplant services credits the culture of Le Bonheur, the vision of its leaders and generosity of its donors — as well as the skill and work ethic of his team at the Heart Institute — for their success. 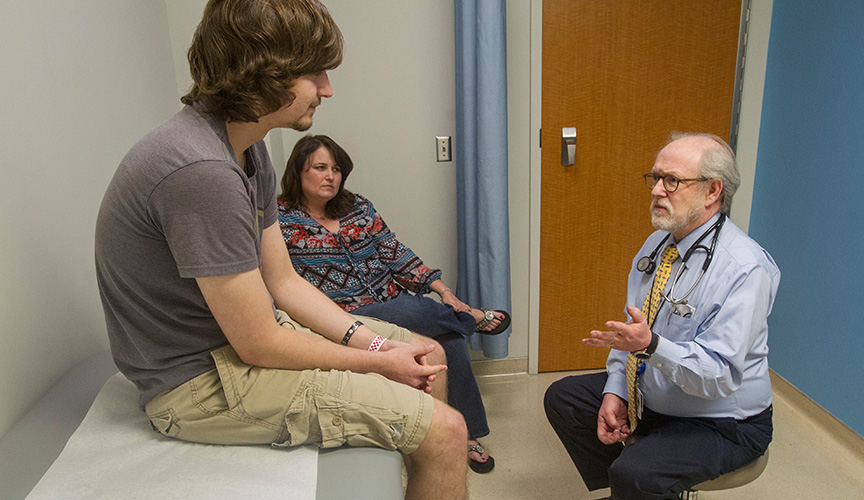 Nephrologists, infectious disease doctors, social service providers, pharmacists — all of these disciplines and more are part of the reason the relatively young heart failure and transplant program at Le Bonheur is successful.

When Towbin arrived at Le Bonheur four years ago, the heart transplant program had been dormant since 1998 and the hospital lacked heart failure services. He had developed top-level pediatric heart programs in both Houston and Cincinnati and was ready to do the same at Le Bonheur at his arrival in 2015.

He first recruited Umar Boston, MD, to serve as the surgical director of the heart transplant, mechanical circulatory support and adult congenital disease programs. Trained at the Mayo Clinic, Boston came to focus on the heart for intensely personal reasons. 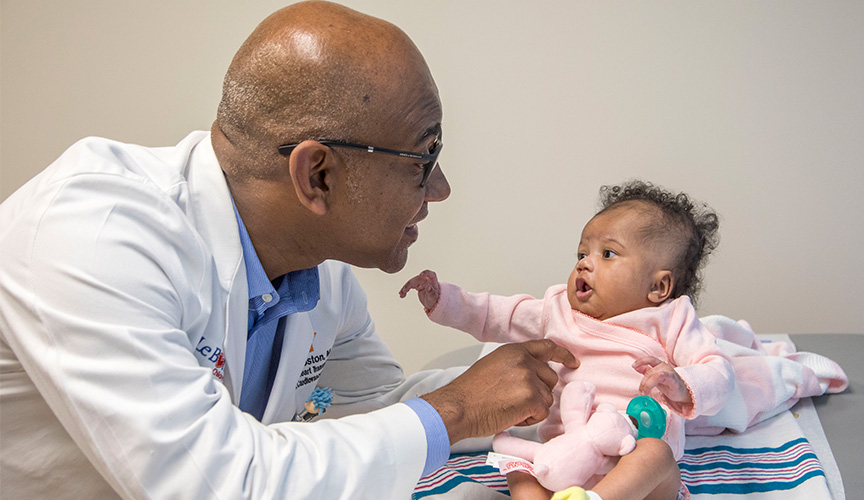 “My dad passed away from heart disease when I was 10 years of age,” he said. Boston said he is drawn to the complexities of pediatric cardiac surgery. “We do maybe 15 different operations, and there are an infinite number of variations within a given congenital heart defect. So it’s always very stimulating and challenging and technically very appealing, too,” Boston said.

“We went full-in with difficult cases right from the beginning,” Towbin said, a practice he felt would be successful because of the quality of the surgeons and the strength of the programs and protocols his team had put together across specialties. “Our initial success built our confidence early on so we were able to accept increasingly more complicated cases and help more children.”

Thanks to the support of donors, the Heart Institute continues to grow to meet the needs of children in our region.  The hospital recently announced the largest expansion to the hospital since it opened the new facility in 2010 — an addition of 19 beds, most in the Cardiovascular Intensive Care Unit, as well as an MRI-guided hybrid cath lab to meet the increased demand for minimally-invasive procedures.

“We have a strong team driven by the desire to advance the care of children with heart failure,” said Towbin. “Their drive and talent will help keep us among the top programs, which is important because children here deserve top care.”

Thanks to Le Bonheur’s robust transplant program, Carlin Johnson is six months past his own transplant surgery, which happened exactly a month after he arrived at Le Bonheur in August 2018. He spent 50 days in cardiovascular intensive care, but has recovered well, say his doctors. Almost immediately after surgery, Carlin could tell he had more energy and wasn’t so tired.

On a recent check-up visit back at Le Bonheur, nurses streamed into the hall to see him, and doctors asked about his latest video game wins. “We miss him here,” said one.

His mom, Carrie, sees progress, too, and not just in the clinical details.

“He’s grown two inches since his last check up,” she said, relief visible on her face.

Carlin is eager to go back to school, where he’s visited a couple of times since his surgery.

“It was great to be able to walk the halls. I realize the things you take for granted until everything changes,” said Carlin. “My friends were glad to see I’m still ticking.” 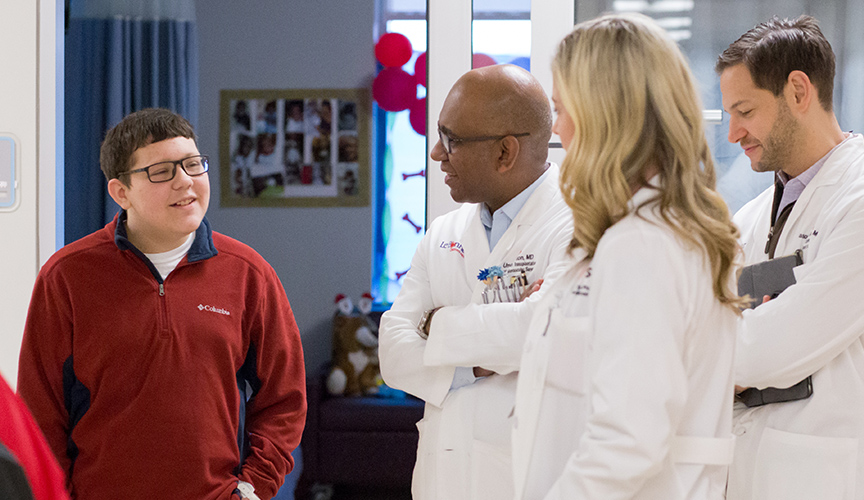 Carrie said, “When he found out about the transplant, he cried at first. Then he sat down and wrote a note thanking Dr. Boston.” Before the surgery, Carlin lined up all of the surgery team and thanked each one.

He still tears up when he thinks of what it took for him to get his new heart.

“It took someone losing their life for me to have this heart,” he said quietly. “I’m still wondering how the family feels who lost one of their members to give me this chance.”

Our Heart (Institute) is getting bigger

This spring, Le Bonheur Children’s announced a significant expansion to the Heart Institute. The two-story addition on the west side of the building will add 19 additional beds in order to create a 10-bed Cardiovascular Stepdown Unit and a 20-bed Cardiovascular Intensive Care Unit. The project also includes a new MRI-guided hybrid catheterization lab bringing the total to three cath labs. Construction will begin later this year.