Natalie Charach remembers when her mother, in her last years, pulled out a piece of yellow ledger paper with a list of charities and dollar amounts.

“She didn’t have a penny to her name, but she had a complete list of all the charities. Five dollars, ten dollars, fifteen dollars … and that was her wish that when she died, we give. She was always generous. I got it from her, I know,” said Natalie. 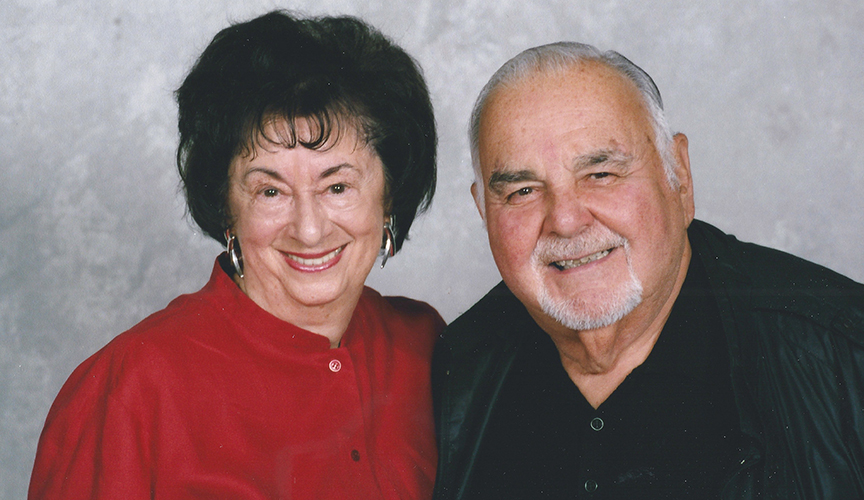 The roots of Natalie’s generosity – and boldness – started many years earlier. When she was 6 years old, her father died of complications from appendix surgery. Her mother was left a widow with three young girls in Pennsylvania mining country. She assumed her husband’s business of driving a two and a half-ton truck up the mountains to sell clothes to the miners. “They had little shacks,” Natalie vividly remembers. “Some had wood on the floor, but most had dirt floors. There wasn’t any furniture except a table and four chairs, maybe a beat up couch. They made maybe $10 a week. I think my mother gave most of [the clothing] away.”

Those formative years influenced Natalie’s lifelong passion of helping others. She and her late husband, Manny, formed the Manat Foundation, which has supported countless humanitarian causes. She is passionate about giving back and believes anyone who has the ability to give, however small, should do so. She has a charismatic personality, a twinkle in her eye and a ready smile.

“I want to do as much as I can until I don’t have any money left. I want to see it all put to use before I die. That’s my goal – to make sure the money goes where it is supposed to go. When I give money, I want it to help provide care and lift burdens for patients and families,” Natalie said.

“I want to do as much as I can until I don’t have any money left. I want to see it all put to use before I die. When I give money, I want it to help provide care and lift burdens for patients and families.”

The Manat Foundation recently made a gift to Le Bonheur Children’s Hospital, which was inspired by Natalie’s personal desire to help others, especially children who are at their most vulnerable. She first heard about Le Bonheur from her dear friend, Marge Duncanson, who had been impressed with the wonderful care the hospital provided to her nephew.

Natalie related a story from when they lost their daughter to cancer in 1989. Among the families she encountered in the hospital during her daughter Janice’s last days was “… a man who was struggling to care for his children and his dying wife. He didn’t have enough money to travel between home and the hospital,” Natalie said.

Natalie, with her generous spirit, helped him financially so he could stay close by. “I just felt so sorry for that man. It was heartbreaking,” she said.

In another personal story, Natalie described how her son Jeff was born weighing just 3 lbs., 2 oz. and required additional medical care. He spent the first three weeks of life in an isolette in a neonatal intensive care unit, which helped him gain strength and ultimately thrive on his own.

The Manat Foundation’s gift to Le Bonheur’s endowment will help ensure exceptional care for future generations of children. Natalie’s gift is recognized at the entrance to the hospital’s Infant Toddler Unit where a plaque is placed in honor of her son, Jeff.

“There are so many people who need help, and I get such joy giving help. I enjoy hearing about the good work Le Bonheur is doing,” Natalie said.