Abijah Smith was born at only 29 weeks and 4 days gestation, weighing 2 pounds, 1 ounce. The size of a small loaf of bread.

He spent the first three months of life at his birth hospital on a ventilator that helped him breathe until his body was big enough to do so on its own. And then, he was transferred to Le Bonheur Children’s Hospital to receive the specialized care he needed for breathing and feeding issues.

Abijah needed what Le Bonheur, the region’s only Level IV Neonatal Intensive Care Unit (NICU), could offer. Founded in 2004, the unit has provided that highest level of care to thousands of tiny infants throughout the years. 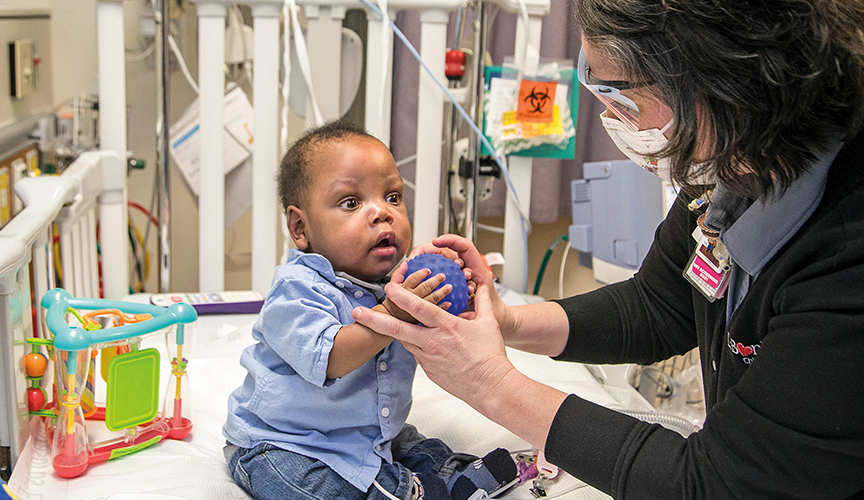 Like Abijah, most Le Bonheur patients are transferred from another NICU because they need the coordinated care of multiple specialists. Many patients come to the NICU for surgery, chronic lung disease, genetic disorders or other complex illness.

“No parent plans to have a baby in the NICU. Many expectant parents are focused on baby names, nursery decorations, and finding the right stroller,” said Mark Weems, MD, associate medical director of Le Bonheur’s NICU. “The anticipation is shattered when a baby is born premature, and it is especially shocking to have a baby who suddenly needs to be transferred to the Le Bonheur NICU.” 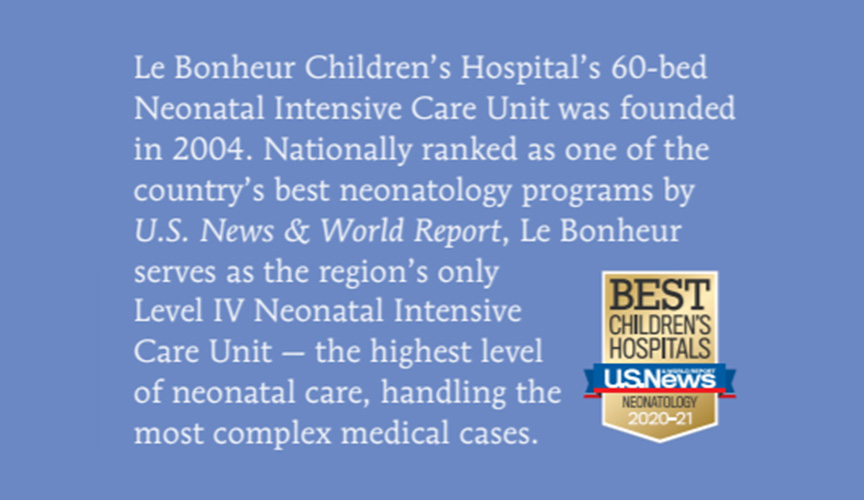 Abijah required serious care and his mom, Delecia Bain, was fearful of what would happen to her son. Weems put her at ease.

“When Dr. Weems walked into Abijah’s room for the first time, he asked
me what I thought Abijah needed,” said Delecia. “He was a doctor who was ready to listen to the parent and not just dictate what he thinks.”

When Abijah came to Le Bonheur, he already had severe bronchopulmonary dysplasia (BPD), a form of chronic lung disease that is a result of prematurity and long-term mechanical ventilation, said Weems.

After a breathing tube helped him breathe for four months, Abijah still required high oxygen. Relying on the tube left him constantly fussy and agitated. His care team worked hard to optimize his growth and comfort — but surgery was the next step.

Abijah became a different baby after the surgery. He is smiling, happy and eating baby food. His development has been wonderful to witness — he has changed right before my eyes.

Delecia was advised that her son needed surgery to help him breathe and eat. Abijah’s doctors recommended a tracheostomy, a procedure to create an opening in Abijah’s neck to insert a tube that allows air into his lungs, and the insertion of a G-tube, a surgically-placed device to give access to his stomach for feeding and hydration.

But Delecia was scared. Surgery was her biggest fear.

Outside of her C-section to deliver Abijah, she had never undergone surgery before. How would her tiny baby survive surgery and what kind of care would he need post-operatively, she wondered.

Abijah’s pulmonologist, anesthesiologist and G-tube doctors explained the processes to her along the way and helped convince her the surgeries would be what’s best for him.

Prior to surgery, Delecia spent time with Certified Child Life Specialist Anne Elizabeth Hattier, CCLS, learning about the procedures and the care Abijah would require afterwards.

“When Anne Elizabeth knew I was afraid of the tracheostomy surgery and the risks of anesthesia, she helped me get over being scared,” said Bain. “She came in with a medical teaching doll and showed me what the trach and G-tube looked like to help me feel less anxious.”

Finally in late November, Abijah had two surgeries performed concurrently, receiving both his tracheostomy and G-tube.

“Over time, his oxygen requirement has improved and we were able to wean him off most of his medications. Getting a tracheostomy, is a step that is very scary to many parents,” said Weems. “Once Abijah got his tracheostomy, he really began to thrive. It was so exciting to see him do things for the first time: smiling, sitting up and interacting with his parents!” 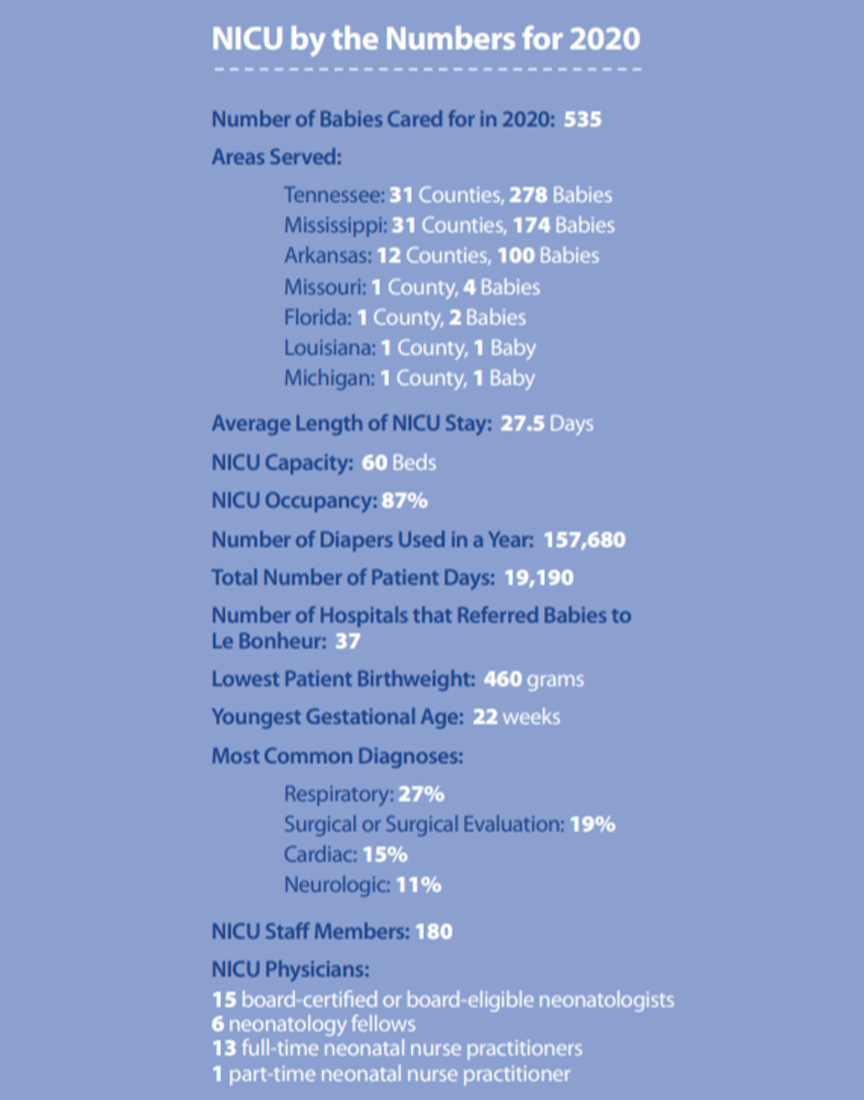 Abijah became a different baby after the surgery,” exclaimed Delecia. “He is smiling, happy and eating baby food. His development has been wonderful to witness — he has changed right before my eyes.”

The NICU medical team has been very informative in Abijah’s care, advising his mom on how to care for him and allowing her to be hands on — taking care of his tracheostomy and G-tube cleanings, and bathing him.

The social work team has been a sounding board when she has had questions and concerns.

When I first saw him when he was born, I thought there is no way he will survive, but thanks to the amazing NICU care Abijah has received at Le Bonheur, he is thriving.

Like Delecia, many parents have never been in the NICU before. The people, equipment, alarms and technology can be overwhelming to parents who are only worried about the health of their baby. The Le Bonheur NICU team reminds parents to ask about anything they are unsure of.

“We know there is nothing in the world more important to the parents than the health of their baby, and I want them to be partners in caring for the baby by understanding everything the medical team is doing to help,” said Weems. 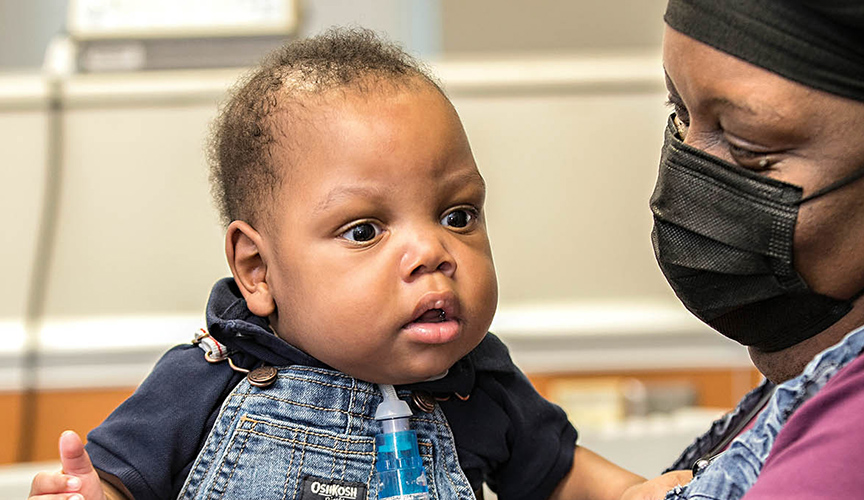 Today, Abijah weighs 17 pounds and counting — he has come a long way from the tiny 2-pound baby his mother welcomed into the world.

“When I first saw him when he was born, I thought there is no way he will survive,” said Delecia. “But thanks to the amazing NICU care Abijah has received at Le Bonheur, he is thriving.” 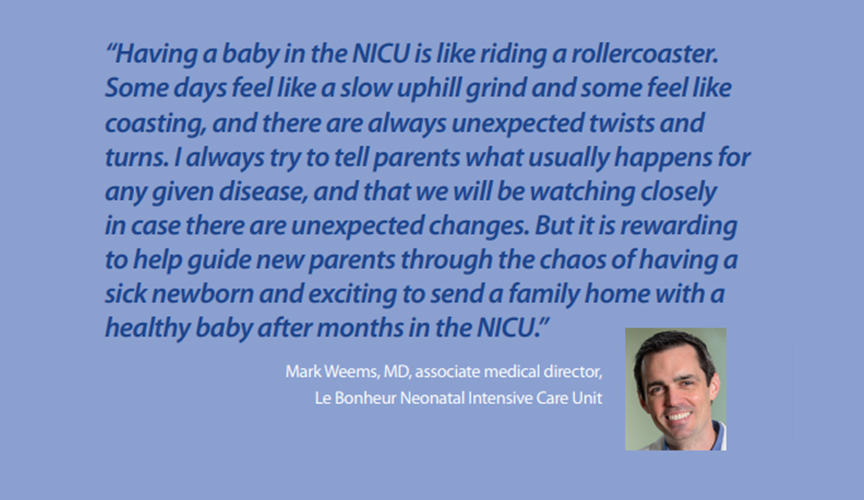 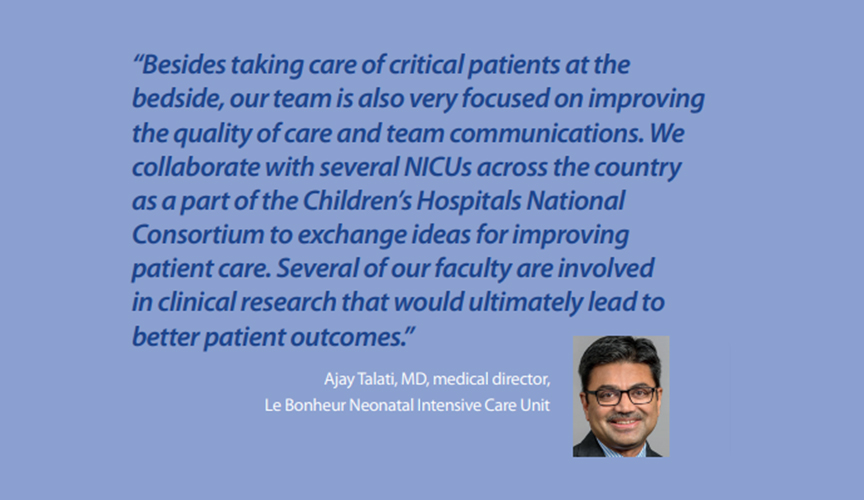 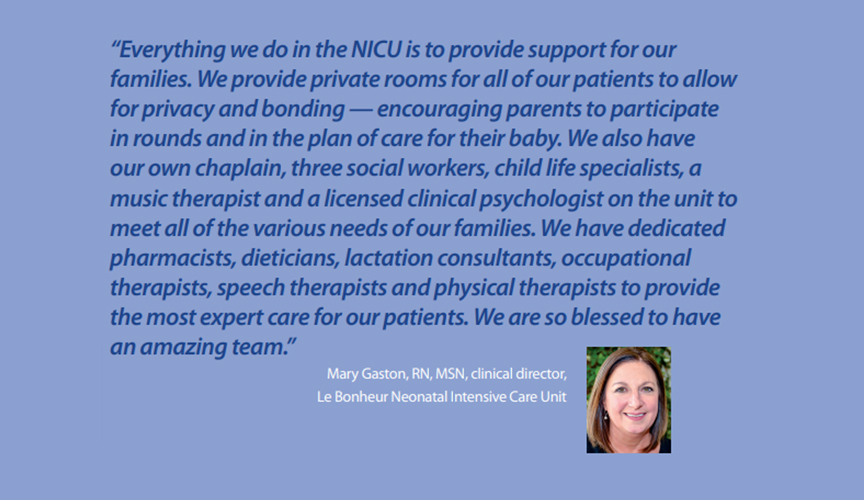